I’ve been struggling to revamp my homepage here on WordPress. So far this has involved changing the theme (general design), designing a custom header, paying for a customizing ap and enlisting help from the WP support team with faded sidebar images. Finally took care of that! Oh, and I chose a custom background. Isn’t it pretty?!! I still want to play around with custom fonts, but right now I’d like to give you some background for White Witch, a prequel novella introducing my Texas Devlins. An editorial review snippet and book excerpt will follow.

While living near Chicago years ago – more than I care to admit – I became fascinated by the history of the Great Fire of 1871, which leveled most of the city. Prior to the fire, Chicago’s buildings, even the fine hotels and mercantile district, were built out of wood. That summer was hot and deadly dry. The city’s fire crews had their hands full fighting one fire after another, even managing to tame a vicious blaze the day before Mrs. O’Leary’s cow kicked over her lantern (so the legend goes.) But there was no stopping the wind-driven monster that sent Chicagoans running for their lives on the night of Sunday, October 8, 1871. 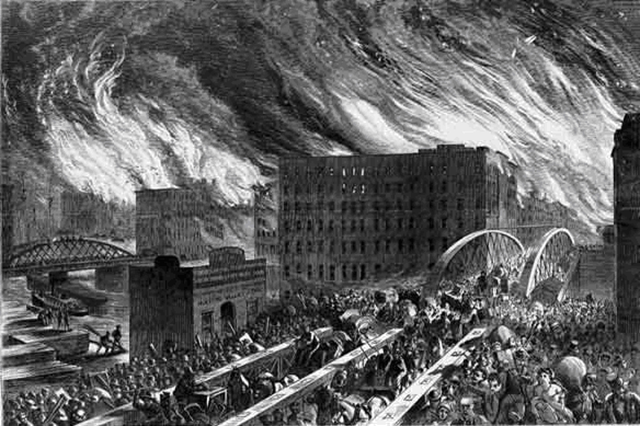 Chicagoans run for their lives across Randolph Street Bridge

How could anyone not be moved by such a tale? Certainly not me! With my imagination on fire (pun intended) I decided to use the fire as the opening for my first book. It didn’t sell, despite the efforts of two different agents and yours truly. Disappointed, I stuffed the manuscript away and kept writing in between raising two kids, being a soccer mom, a rabid band parent during the afore mentioned kids’ high school years, and running a boarding house for six unruly, lovable cats. See Six Cats In My Kitchen.

Eventually, after publishing the first two books in my Texas Devlins series, I decided to dust off the tale of the Chicago Fire, restructure it to fit the series and publish it as a prequel. This required adding a new story line illustrating the fact that my characters are psychics. How did that come about? That’s a story for another day!

As a novella, White Witch is necessarily short, but it spotlights the heroine’s clairvoyant ability in a highly dramatic fashion – at least I think it does – and sets up the great adventure she undertakes in search of the man of her dreams. For that story you’ll need to read Darlin’ Irish (Texas Devlins, Jessie’s Story).

You’ll also meet Jessie’s brother Tye in both the novella and Jessie’s book. He’s kind of a charming rascal, but Jessie loves him dearly. I hope you do, too, because he gets to strut his stuff in Dashing Irish (Texas Devlins, Tye’s Story). His encounter with a feisty Texas cowgirl begins a “stunning story set against the backdrop of the not-so-civilized state of Texas in the . . . 19th century.” – InD’Tale Magazine, September 2013
Oh, and don’t forget baby sister Rose! She doesn’t experience the terrifying fire, lucky girl, because she’s not living with her family at that time, but she’s tucked away in Tye and Jessie’s thoughts. Her secrets aren’t fully revealed until she meets her destiny, a hunky half-breed cowboy, in Dearest Irish (Texas Devlins, Rose’s Story).

My advice, dear reader, is take a deep breath and prepare for a wild ride from the ashes of Chicago, across the plains and mountains of the Old West, into the heart of Texas romance. Um, you might need a small fire extinguisher.

5-Star Review
Lyn Horner weaves a tantalizing tale of a young girl beset by visions, . . . the story is short, but sets the stage well for the next installment, with great characters and a tempting story line. The descriptions of the Chicago fire are spellbinding . . . . “White Witch” is a well written snapshot of a climactic time in American history, as Jessie and her family find a way to make their lives and fortunes in the new frontier.

Jessie hiked up her skirts and stepped into the cool water of Lake Michigan, wading out until the gentle waves lapped at her knees. It felt wonderful on her sweaty skin. She wished she could immerse her whole body but didn’t relish walking home in sopping wet clothes.

“Jess, you’d best be careful,” her brother Tye called from a few feet away. “There could be a drop-off.”

“I know. I’ll not go any farther out. And take your own advice, brother dear.” She glanced at him enviously. Having stripped away his shirt and rolled up his pant legs, he was splashing water on his chest, not the least bit concerned about getting his trousers wet.

“Aye, I will, although I’m a fair swimmer, unlike you.” He grinned at her mischievously. “In case ye haven’t noticed, I’m not burdened by a skirt and petticoats either.”

“Humph! Go ahead and get your trousers soaked. Doubtless you’ll enjoy being ogled by every woman we pass on our way home, ye wicked devil.”

He laughed and sliced the water with the edge of his hand, sending a small geyser her way. It caught her in the face, causing her to shriek and duck away as droplets dampened the bodice of her worn gray gown.

“Don’t do that!” she scolded. “I don’t want to get all wet.” Wiping water from her eyes, she blinked several times to clear them. Once she was able to keep them open, she happened to glance into the distance across the lake . . . and froze.

The lake disappeared before her eyes, replaced by a burst of fire that soared high overhead, wringing a strangled cry from her lips. The fire turned into a hellish scene of flames leaping from building to building along a familiar street, a street filled with people running for their lives before the monstrous fire. It licked at the wooden paving block underfoot and at the walkways lining the thoroughfare.

Her view of the event shifted abruptly. Now she saw her family’s cottage going up in flames behind her as she was being whisked away.

“Nay, not our home!” she wailed without realizing she’d spoken. Then the scene changed again. Now she was looking toward the city from far across the lake, and what she saw made her scream in horror. The spell was broken. As suddenly as the vision had taken hold of her, it released her. Dizzy with shock, she lost her footing on the sandy lake bottom and tumbled face-first into the chilly water. The shock caused her to suck in water.

Choking, Jessie struggled desperately to push to her feet, but the skirts tangled around her legs held her trapped. Panic set in; her heart thundered in her chest. She was about to drown when a hand grasped her under one arm and hauled her upward. She broke the water’s surface coughing and fighting for breath.

“Thank God! Ye scared the bejaysus out of me, sis,” Tye said in a shaky voice as he held her steady, hands locked around her waist.

“I thought I was going to die,” she croaked when she could breathe again, clinging to his arms for support. “I would have if ye hadn’t pulled me up.”

“Aye, well, what are big brothers for?” He laughed, but she noticed his voice still shook. “Now tell me why I felt such a terrible burst of fear from ye just before ye screamed and toppled over.”

“Oh, Tye, I had the most horrible vision!” she said, not surprised by his comment. Her brother was a sensitive. He could feel what others were feeling, especially those close to him. She licked her quivering lips and stared into his eyes. “I saw the city burning.”

“Aye. There was fire everywhere. We were running for our lives.”

He swallowed, Adam’s apple bobbing. For a moment he stood staring at her; then he grasped her arm and towed her toward the shore. “Come on, we’d better get ye home and out of those wet things. Ye must tell Da what ye saw.”

“Nay! He’ll raise the roof if I even mention having a vision. Ye know that, and besides, he’d not believe me.”

“Nevertheless, he needs to hear it. If what ye saw is true, if your gift isn’t playing ye false, we must prepare for the worst.”