Psychics in the Old West? Yes indeed! Meet Lyn Horner’s Texas Devlins, a trio of siblings descended from Irish Celtic Druids. Each one is blessed with a rare psychic gift.

Jessie Devlin is what her Irish ancestors might call a “white witch.” She has second sight, a disturbing ability to glimpse the future. When she foresees Chicago on fire, it’s a soul-searing experience. Far worse is the terrible night in 1871 when she and her family and thousands of Chicagoans run for their lives from the towering flames. Worst of all are the horrific nightmares Jessie suffers for months after the destruction.

However, when Jessie’s dreams suddenly begin showing her a strange man with gentle, loving eyes who saves her from a fiery death, she becomes convinced they are destined to meet and fall in love. But will her father give her time to find her dream hero or will he force her into marriage with the wrong man? 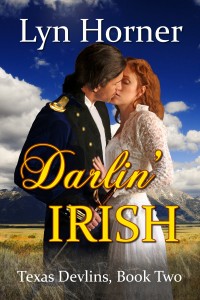 Introduced in White Witch, Jessie Devlin has visions of the future. A survivor of the Great Chicago Fire of 1871, she dreams of a gentle, loving stranger who saves her life. She believes they are fated to love, and a prophetic vision sends her west in search of him. But a second vision warns of a fiery-eyed madman who may lurk somewhere beyond the horizon. Will her quest lead to happiness . . . or into a deadly trap?

Captain David Taylor is a Texan banished from home after fighting for the Yankees in the Civil War. Now serving on the frontier, David meets Jessie while returning to his post after a trip east. She stares at him as if seeing a ghost, for he looks like her dream hero, but his highhanded ways infuriate her. While David is entranced by Jessie’s beauty, her firecracker temper brings to mind someone he’d rather forget.

As the two journey west by rail their clashing personalities war with a fiery attraction to one another. Violence dogs their path and explodes in Mormon Utah. Love hangs in the balance until a shattering final battle between good and evil on the broad Texas plains.

This Romeo and Juliet tale focuses on Tye Devlin, the eldest of three psychically gifted siblings. Tye is an empath; he “feels” others’ emotions. Over time, he has learned to block out most of the “racket” in order to save his sanity, but when he meets Texas cowgirl Lil Crawford, he has no defense against her hidden pain.

Unlucky in love, Lil guards her bruised heart behind a tough façade, working alongside her father’s cowhands. When a handsome stranger with an Irish brogue calls her beautiful, she thinks he’s mocking her, yet she wishes such a man might truly find her beautiful. Haunted by his own nightmarish memories, Tye faces an uphill battle in his pursuit of this spirited, part-Cherokee heroine.

Set against a backdrop of 1870s Texas ranch life and an iconic cattle drive, this epic love story pits Tye and Lil against dangerous enemies and their own feuding families as they fight their personal demons. Will Tye’s gift turn out to be a blessing or a curse?

Set 1876, this book stars Rose, youngest of the Devlin siblings. Rose has an extraordinary ability to heal with her mind, a secret gift that has caused her great pain in the past. She also harbors another darker secret, one that threatens her chances of ever finding love.

Half-breed cowboy Choctaw Jack straddles two worlds, dividing his loyalties between his mother’s native people and the white family of a friend who died in the Civil War. Like Rose, he keeps shocking secrets that, if ever brought to light, could cost his life. Yet, after discovering Rose’s healing gift, Jack risks everything, kidnapping her in a desperate attempt to save his dying mother.

As Jack spirits Rose away into the heart of Indian Territory, she comes to accept his reason for abducting her but fears the feelings he stirs within her. Tested by natural forces and white men who revile Jack and scorn Rose for riding with him, Jack soon discovers the greatest risk he faces may be caring too much for his lovely paleface captive.

This 4 Book Bundle combines an introductory novella with three full-length novels at a bargain price. Come ride the wild west with the Devlin siblings and see how psychic powers can change one’s destiny.

It’s Christmas 1885 and everyone is gathering to celebrate at the River T ranch. The day promises a feast and fellowship for all, but surprises lay ahead.

Nora Taylor adores Vittorio Medina. He’s been her best friend all of her young life, but now she wants more than friendship from him. She’s too young, he insists while fighting his own growing feelings for her. Besides, she is the boss’s daughter. He’s just a poor cowboy of Mexican blood. They can never be together.

This Christmas threatens to bring Nora more pain than joy until a special gift offers hope.