At last! Beguiling Delila (Romancing the Guardians, Book 6) will be released on July 14, Bastille Day – France’s equivalent to the US Independence Day. Why? Because most of the book is set in France. Opening in Paris, the story takes Delilah Moreau, the French Guardian, and Leon Tseda, her hero, on a life-and-death race across the country to Nice on the breathtaking Côte d’Azur, before they take flight to America. 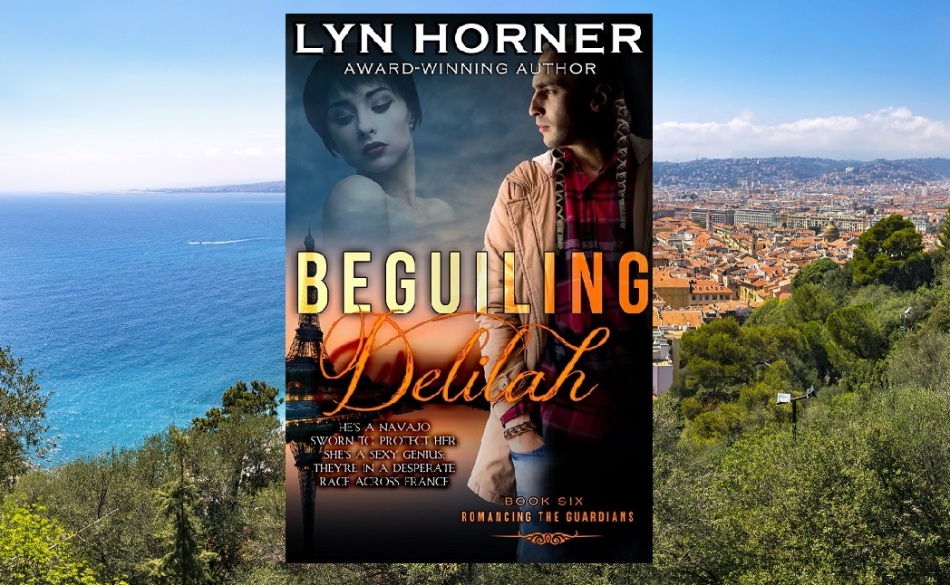 Leon is one of my favorite characters from the series. He’s no spring chicken, and neither is Delilah, but they’re not too old for a second chance at love. Their journey is fraught with danger, excitement and steamy, mature romance.

Now, in case you missed any of the earlier books in this epic series, here is a quick overview. First, there are seven Guardians, each sworn to protect a precious scroll containing a secret prophecy handed down from ancient seers. Not to be revealed until mankind is ready to listen, the prophesies are in danger of being seized by vicious “Hellhounds” who want to use them to gain power and wealth.

Decoding Michaela features a heroine who can read minds. Michaela Peterson is stunned by news that her revered leader, the High Guardian, has been murdered. She’s attracted to Dev Medina, the handsome messenger, but fears he may be out to steal the scroll she guards. Can Dev win her trust and unlock her heart before the Hellhounds capture her?

Capturing Gabriel is set in the mountains of Colombia. When Gabriel Valdez is tracked down by a feisty Navajo beauty intent on convincing him to go to the United States with her, he instead takes her prisoner. Josie doesn’t count on falling for him. Gabriel doesn’t intend to trust her with his secrets or his love, but the heart has a mind of its own.

Touching Charlotte Introduces Charlotte Dixon, an empathic Guardian, and Tristan Jameson, an ex-NYC cop burdened by hidden pain. He needs healing and love, but how can a man romance a woman who can’t stand to be touched? Getting past Charlotte’s barriers while protecting her from Hellhounds proves the ultimate challenge.

Profiling Nathan is a chilling murder mystery/sexy romance. Guardian and ex-con Nathan Maguire just wants to make a living inking tattoos, but FBI profiler Talia Werner turns his life upside down. To save her pretty neck, he must help catch a serial killer. His deadly psychic gift may come in handy.

Lyn Horner is a multi-published, award-winning author of western historical romance and romantic suspense novels, all spiced with paranormal elements. She is a former fashion illustrator and art instructor who resides in Fort Worth, Texas – “Where the West Begins” – with her husband and a gaggle of very spoiled cats. As well as crafting passionate love stories, Lyn enjoys reading, gardening, visiting with family and friends, and cuddling her furry, four-legged children.

Sweethearts of the West