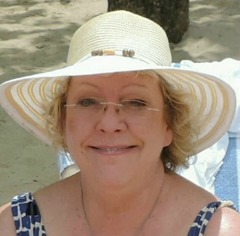 Hebby is a member of Romance Writers of America, and the past president of North Texas Romance Writers. She is also a member of Yellow Rose RWA. She was selected for the Romantic Times “Texas Author” award, and she won a national Harlequin contest. Her book, BORDER HEAT, was a Los Angeles Times Book Festival selection.

The author lives in north Texas with her husband, Luis, and maltipoo, Maximillian.

Welcome, Hebby! Let’s start with you telling us how you began writing.

Sure. I began writing by being a voracious reader from the time I was in the third grade. I was reading full-length novels then, mostly about horses, like the Black Stallion series, and Call of the Wild about wolves. I was the typical tomboy “horse-crazy girl.” At ten years old, I wrote a one-hundred page book about a girl who tames a wild mustang. I even did research about wild mustangs in Glacier National Park and set the book there—good old encyclopedia research. We didn’t have Google then. Heck, the Internet wasn’t even a far-out idea at the time. J By the time I entered high school, I had read all the classics, although Moby Dick was tough-sledding. Of course, I loved Austen and the Bronte sisters. Summary answer, I started writing because I loved to read so much. I still read a lot, it’s my go-to relaxation activity, and I don’t understand writers who say they can’t read anymore because they’re constantly editing in their head. I just let it go and enjoy the ride!

Are your books published by a large publishing house or small press? If so, how did you come to be with this publisher? Are you self-published? If so, what made you choose this route?

I was originally published with a large house, Kensington. The first National RWA conference I went to in St. Louis, I had an agent appointment and when I pitched my book, which was set in Puerto Rico with Latino characters, the agent told me Kensington was looking to do a multi-racial line. The agent took me on and submitted Betrayed, the second romance I’d written. Kensington bought it, but they took three years to bring it out! I stayed with Kensington for several years and sold them ten books. Unfortunately, they were very restrictive about what I could write. And I’ve always written somewhat unusual settings and characters, Latino mostly. I grew up on the Mexican border and my husband of twenty-eight years is Puerto Rican. Latino culture speaks to me and that’s what I enjoy writing.

Due to Kensington’s restrictions and their Latino romance line closing, along with family considerations, I quit writing professionally for twelve years. I got back into writing a couple of years ago because of the lure of writing what I wanted in our new digital world. I rewrote several of my Kensington books and had them professionally edited and self-published them, thinking publishers wouldn’t want re-writes. For my new book (at the time), a medieval romance, I shopped it around and signed with The Wild Rose Press. I was very happy when they decided to take my book, as I’ve heard nothing but good things about TWRP from other authors. So, now I publish some of my books through them, while I still publish independently as well. I’m a hybrid author, and it can be confusing at times, but it gives me a great deal of independence and flexibility.

I’ve heard good things about TWRP too. Are you a plotter or a pantser? Why?

I’m definitely a plotter, always have been. For my first few books, I wrote a scene-by-scene outline that easily ran between fifty to one hundred pages (this was for long historicals). I have gotten away from the outline as some of my fellow authors pointed out it might hinder my creativity. However, if I get stuck or feel that my “middle is sagging,” I go back to outlining to make the book work. I guess I’m a plotter because my previous day jobs were all in finance and accounting. I’m a very analytical and organized person. The thought of just starting out with a blank page and a vague idea of what I want to write is frightening to me! Even if I don’t do long outlines anymore, I do deep background character write-ups, along with conflicts and motivations, and have a sketchy outline of the basic plotline and action.

How do you develop your plots and your characters?

This is a tough question, as sometimes, I get a brilliant concept for the basic story or plot. My first published book, Betrayed, I specifically wanted it to be a Puerto Rican “Gone with the Wind” and set it during the time Puerto Rico revolted from Spain. The basic plotline had to be an arranged marriage with the heroine loving her childhood friend, and I had to show the two men in her life as being on opposite sides in the revolution, that was clear. For my medieval romance, The Princess and the Templar, I wanted to do a medieval “Thornbirds” concept, with the man being restricted by his vow of celibacy. I didn’t want to tread on religious ground and use a monk or friar, so I researched and learned about the Templars (I did this before Dan Brown’s “Da Vinci Code” and I can tell you there wasn’t much about Templars out there then).

On the other hand, characters come to me in bits and pieces, some of them share traits with me, others are completely opposite of how I am. I use character traits from family members and friends (so watch out!), and I try to have my heroine/hero on the ends of opposite emotional spectrums to heighten the conflict. In The Best Bet I crafted a very closed-off heroine who had been raised by an ambitious immigrant father because she lost her mother when she was young—this background, along with her Latino culture, made for an interesting character. In the companion book, The Best Game, I wanted to write about a small-city girl from San Antonio who went to New York and was a successful fashion model, but she learns to hate her occupation because New York relationships revolve around her being “arm candy” for rich and powerful men. So, she gives up her success and money, returns to San Antonio to attend college, and falls in love with the boy next door. In short, I’m all over the place with plots and characters, and they usually come to me in pieces, and I just keep fleshing them out and going deeper into my characters.

Cool! What was one of the most surprising things you learned while writing your books?

If we’re talking the “craft of writing” I have to say I was and still am “freaked out” at how hard it is. It never gets any easier—you just go up a level and then another and another and … If we’re talking about research, I became fascinated by the medieval period and learned a great deal about the Knights Templar and all the secrecy surrounding them and the conflicting stories about why they were disbanded, tortured and burned at the stake. Some of the historical facts about the Templars are so fascinating and crazy; it’s hard to believe people lived like that a few centuries ago and the challenges they faced. Examples: Did Philip the Fair grab them and imprison them because he owed them tons of money or were they really worshipping a devil-like creature in their initiations? And how did they go from being poor knights, helping pilgrims in the Holy Land, to being one of the richest organizations in Europe within a couple of centuries? What were they digging for in the Temple Mount in Jerusalem? What happened to the bulk of their treasure when they were arrested? I could go on and on about the Knights Templar, that’s why they’re so fascinating.

Fascinating indeed! Where in the world would you most likely to visit?

Short answer for this one: Venice! It’s on my bucket list. I find Venice so romantic and unique and wonderful. It looks like a movie set, but people actually live there and have for centuries. Absolutely love any and every thing about Venice and can’t wait to go there!

What aspect of writing makes you happiest? What frustrates you most about writing?

These are short answers, too. I’m happiest when the words are flowing so fast my fingers can’t keep up with them. In today’s digital world, the most frustrating aspect of writing is knowing what to do for promotion and/or social media. I always feel like I’m doing the wrong thing or not enough. But I know this interview is the right thing! And I want to thank you for an awesome list of author questions to choose from.

Thank YOU, Hebby! You are a terrific guest! Now please give us a look at your new release. 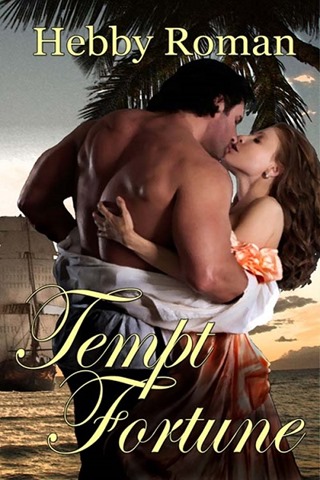 Desperate to escape an arranged marriage, Cuban beauty Angelina Herrera flees to Key West to start a new life and build her own business. But when her past catches up with her, she realizes the only way she can avoid the arranged marriage is to marry another … in name only.

Drawn to the fiercely independent Angelina, Cuban revolutionary, Alejandro Estava marries Angelina. Though outwardly he agrees to the platonic relationship because of his secret past, he cannot deny his powerful desire to possess her completely.

But tempestuous forces more powerful than the hurricane descending on their island home unleashes their mutual passion while threatening their yearning for a lifelong bond.

The magistrate cleared his throat loudly and intoned the opening words of the ceremony. Angelina strained to listen, but his words didn’t register.

She felt strange, as if she were standing outside her body and looking on. She’d acquiesced to their marriage because it was better than returning to Cuba and facing what her father had planned. Alejandro had promised she could live her life as she saw fit, running her factory without his interference. He’d even promised to end the marriage when her father was convinced to leave her alone.

But somehow, all his reassurances rang hollow. She was more than aware of their attraction to each other. How could they possibly withstand temptation, living together as man and wife? And if they succumbed to temptation, there would be no easy annulment. Even if they weren’t married by the Church, if they shared a bed, they were married in the eyes of God. And what if a child came of their union?

The magistrate, attired in a worn frock coat and soiled linen, said something about taking this man and stared at her. Trying to focus, she was like a fish out of water, completely out of her element.

She lifted her head and gazed expectantly at the magistrate.

The man met her gaze and frowned. Impatience colored the tone of his voice when he repeated, “Will you, Angelina Ximenes, take this man for your lawfully wedded husband? For richer or for poorer, in sickness and in health, to honor and obey?”

The word “obey” stuck in her mind.

What had she gotten herself into?

You can purchase TEMPT FORTUNE on these sites: