Jacquie Rogers is a former software designer, campaign manager, deli clerk, and cow milker, but always a bookworm. Reading is her passion–westerns, fantasies, historicals of any era, all with a dash of romance. If an author can make her laugh, she’ll buy every book he/she ever wrote. Jacquie now lives in suburbia with her husband and one pampered cat, but her stories often take place in rural Idaho, where she grew up.

Thanks for swapping blogs with me today, Lyn! I’m so excited to participate in the Rawhide ‘n Roses anthology with you and thirteen other authors, ramrodded by Susan Horsnell. I hope everyone reads Lyn’s excerpt of her story, The Lawman’s Lady, at Romancing The West.

These stories are short-short, only 2,000 words, a sample of what readers can expect when they buy our books. We all have very different styles and voices, so this collection of stories should be interesting, for sure!

My Rawhide ‘n Roses story, a bonus to the Hearts of Owyhee series, is Much Ado About Misfires, starring Reuben Wallace and Lucy Gwynn. It’s set in 1874 in a rollerskating rink. Yes, skating was wildly popular then, even though their skates were crude by today’s standards—no stopping block, for one thing.

Here’s a little more about it:

Reuben Wallace couldn’t ask his sweetheart to marry him when he had no means to support her. Now, four years later, he’s built a horse ranch and he needs a wife. He heard that the new rollerskating rink was all the rage, and the ladies congregated there. With luck, he’ll find his Lucy.

Lucy Gwinn expects her beau to propose but he’s just another second-best man. Her heart has always belonged to Reuben, the big hard-headed lug. But her beau is content with circling around the rink—until Reuben knocks them all head over teakettle. Can Reuben score a perfect ten on his first try?

“Are you married?” Reuben asked Lucy.

“Good. I came here to marry you and take you back to the ranch. I just built a house with two bedrooms and we can easily build on. There’s no furniture but I have enough money with me for you to buy all we need for now.”

“How did you know I was here?”

“I didn’t—heard tell your folks had moved to town so I reckoned we could get married. Seems like a danged good idea to me.”

“You’re direct, but then you always have been. What if I don’t want to marry you?”

“In that case, I guess you wouldn’t, but I’m hoping you will. We get on good and always have, and there ain’t no prettier girl in the county.”

“If I’m the prettiest girl, then don’t you think I should marry the handsomest man?”

That stopped him short. She had a point—why should she marry him? “Is that a ‘no’?”

She pulled him to his feet, but he was none too steady. “That’s a ‘we haven’t seen each other for four years so we should get reacquainted with each other.’ Let’s skate.” 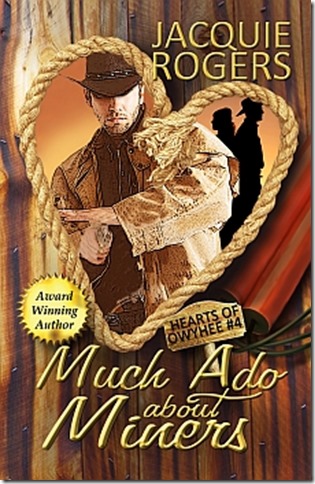 Rawhide ‘n Roses won’t be on sale until March 15, 2014, but I have several other books and short stories out. The latest novel is the fourth offering in the Hearts of Owyhee series, Much Ado About Miners. I had a lot of fun with this story and incorporated some of my fondest childhood memories in it, although in vastly altered form. Plus, Kade and Iris had a lot of fun with biscuits. Here’s the blurb:

Hired gun Kade McKinnon interrupts a bank holdup and is shot by the teller, Iris Gardner, whose victims have a tendency to be the next groom in town. Will he be the groom this time?

Iris Gardner, a smart, independent bank clerk, fell in love with Kade when she was too young to know better. So when he walks back into her life and her bank, it’s only fitting that she shoots him … by accident, of course. But she’s a suffragist now, so his charms can’t affect her…right?

Kade doesn’t know Iris’s company is the one who hired him to escort a bullion shipment, and Iris doesn’t know Kade owns the security company, but they both know robbers are on their trail. Which is more likely to be stolen—the silver, or his heart?

And an excerpt of

Much Ado About Miners

Iris stood and gazed into Kade’s eyes with a passion that made him want to kiss her right there, on her engagement day. “You know a whole lot of things I know nothing about,” she whispered.

He took a stride toward her. “When you hit your head, you asked me if I’d kissed you.”

“Be-because…” Her mouth opened a little bit, and she licked her upper lip. Kade had all he could do to keep from sweeping her up in his arms and making love to her the way a man should—the way she deserved to be loved.

“No!” But she nodded, and Kade stepped closer, to within an inch of her, and it took all his willpower to stop there.

“The way you kiss Edward?”

“I, uh, don’t…” She gazed into Kade’s eyes. “We never…” She touched her forefinger to her lips.

“Just one kiss, then, so you know how to do it.” He pulled her close, pressing her back so her breasts pressed into him. “Put your arms around me, princess.”

She brushed her hands over his sides and when she caressed his back, he could barely hold back from ravishing her. “Tilt your head back and open your lips just a little.”

As she did, she whispered, “Just this once.”

He’d make her remember “just this once” forever.

Much Ado About Marshals http://amzn.com/B0058ON1LS

Much Ado About Madams http://amzn.com/B007HRTQ0O

Much Ado About Mavericks http://amzn.com/B008EDN9T4

Much Ado About Miners http://amzn.com/B00HGUD17G

Find all of Jacquie’s books and short stories here:

Visit Jacquie on these sites: