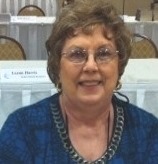 Caroline Clemmons is an Amazon bestselling author of historical and contemporary western romances whose books have garnered numerous awards. A frequent speaker at conferences and seminars, she has taught workshops on characterization, point of view, and layering a novel. Caroline is a member of Romance Writers of America, Dallas Area Romance Authors, Yellow Rose Romance Writers, and Hearts Through History Romance Writers.

Caroline and her husband live in the heart of Texas cowboy country with their menagerie of rescued pets. When she’s not indulging her passion for writing, Caroline enjoys reading, travel, antiquing, genealogy, painting, and getting together with friends. Find her on her blog, website, Facebook, Twitter, Goodreads, and Pinterest. 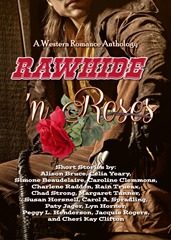 When I was invited to participate in the RAWHIDE ‘N ROSES collection of short stories, I was thrilled. I was also terrified. I don’t write short stories well—I write novels and novellas. Yikes! Could I compose a short story of only 2,000 words?

Non-writers might think shorter is easier, but I promise you it is not. Getting all the components of a love story into only 2,000 words is an art. And it’s one I still haven’t mastered.

So, I wondered, what should I write? In THE TEXAN’S IRISH BRIDE, for which I’ve planned to do linked books, Dallas McClintock marries Cenora Rose O’Niell. I decided to write a story telling how Dallas’s parents (Houston McClintock and Gentle Dove Tall Trees) met and fell in love.

As I said, writing short is hard. My story came out to just over 8,000 words. I edited and edited and asked Lyn to help me, which she did. Finally, the story was down to 1,999 words. I’d cut all the descriptions I love, cut the inciting incident, cut Houston’s stay in Texas, and cut much of the romance. But the love story is there, complete with why Dallas’s parents remained in Georgia.

I repeat, writing short is hard!

Several of the authors in this collection/anthology are gifted at short stories. All of them wrote very intriguing stores. And where else can you get fifteen stories for the price?

Here’s a peek at mine.

Too weak to move, Houston McClintock’s eyes refused to open.

“You’re safe now.” The voice soft as velvet calmed him.

He gasped to speak but his dry throat and tongue refused to cooperate. A damp cloth moistened his lips, then drops of water trickled into his mouth.

Someone bathed his face. Blessed coolness. He forced open his eyes.

The most beautiful woman he’d ever seen leaned over him. Her bronze skin proclaimed her an Indian. Light from the window shot blue and copper highlights across her coal black hair. Kindness shone from her face. She appeared near his age of twenty-five.

”Good morning. My name is Gentle Dove, but friends call me Dovie.” Her smile illuminated her features. She braced his head and held a cup to his mouth.

He searched the room for clues. Planed log walls bore signs of expert craftsmanship. He lay in a brass bed covered by a brightly colored quilt. Dovie wore Anglo clothes.

In whirling memories, he recalled his frantic ride for the trees. Men shooting. Pain in his shoulder and head. The sensation of falling.

Had the robbers stolen his saddlebags? Money from the sale of family land in Tennessee? His favorite horse, Lightning?

He tried to rise but fell back. “Where?”

She laid a gentle hand on his shoulder. “Don’t fret. You’re in the home of John Tall Trees in Georgia. You were badly injured and stripped when Papa found you.”

Damn, was he buck naked? Houston slid his hands frantically under the covers. He exhaled relief when he realized he wore britches.

She smiled mischievously as if she understood his concern. “You’re taller than Papa but he loaned you clothes. We didn’t risk opening your wounds to add a shirt.”

He glimpsed strips of fabric binding his shoulder and chest. “Bad?”

“I dug out the lead, but we almost lost you. Only a strong will could have survived.” She leaned forward to adjust the bandage at his forehead. Honeysuckle filled his senses and a cascade of lustrous ebony hair fell across his chest.

“Four days ago I found you and tracks of three men. You needed help immediately. My daughter is very skilled in our medicines.”

“Don’t fear.” She checked his shoulder bandage and offered a wry smile. “I have also studied white man’s medicines.”

John gestured over his shoulder. “Big dun showed up. Figured she was your horse.”

He sighed with relief. At least he hadn’t lost Lightning. “Saddle?”

“None. Horse appeared interested in the house. Guess she tracked you here.”

Dear Lord, his family’s money was in the saddlebags. They’d trusted him and he’d let them down. “Family…write…for me?”

“I’ll post a letter today.” He repeated the name and address.

Houston tried to nod, but the hammering in his head increased. He closed his eyes

Dovie tucked the quilt around him. “Rest. When you wake, I’ll have warm soup for you.” 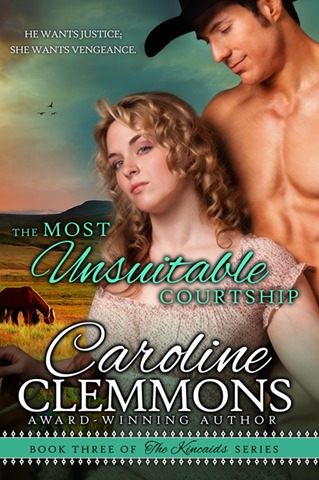 In addition to HOUSTON McCLINTOCK in RAWHIDE ‘N ROSES, I have eighteen other titles available. My latest release is THE MOST UNSUITABLE COURTSHIP, Kincaids book 3. Here’s the blurb:

When Storm’s best friend and the friend’s wife are murdered, Storm secures a temporary appointment as Federal Marshal so he can capture the killers. He follows them to twenty one year old Rena’s home, which is in flames when he arrives. She has survived by following her elderly husband’s strict instructions and watched in hiding while the men murdered him. Storm intends to take her to the nearest town where she will be safe. She can identify the men who killed the person who had been her husband in name only and like a grandfather to her, and she vows to kill at least one of them. Whether or not Storm allows her to accompany him, she assures him she will go after the murderers. She is the only person alive who can identify the evil foursome whose policy has been to leave no witnesses. Storm agrees to take her with him. She’ll be safer with him to protect her than she would riding alone.

As a powerful and passionate love blossoms, they unite to rescue three orphaned children, fight the elements, and encounter the killers. Will their love be enough to protect them?

And here is an excerpt from THE MOST UNSUITABLE COURTSHIP:

She emerged from the brush straightening her trousers and shoving her pistol back into her waistband. “Where do you think those men are going?”

“Indian Territory. They’ll steal all they can before they reach the Red River and leave no survivors to identify them. They’re selling off the stolen stock along the way, so that will slow them some.” He wondered if she knew how to use the gun.

“But I saw their faces.”

He sent her what he hoped was a frightening stare. “If they knew that, you’d be dead for sure.”

She shivered, but glared at him. “Do not think to frighten me. I will do everything I can to kill these men and reclaim my gold and my mother’s locket. It is not that I care about the jewelry that once belonged to Abram’s wife. But to him, it meant a great deal, and I want it because he gave it to me.”

Storm wanted to shake her. Not that he hadn’t lived all his life with stubborn women. At least his oldest sister Pearl made sense. He’d worried about shy Sarah, especially when she’d appeared head over heels with a con man. Now that Sarah and Nate were married, she had life figured out. Nate had surprised everyone, even himself. Storm suppressed a smile and worked up his anger again at his traveling companion.

“We can be in Llano by nightfall. We’ll get a couple of rooms there and you can rest.”

She shot him a suspicious glare. “You think to abandon me in that town. If we stay somewhere, we will be in the same room so I can watch you.”

Shocked, Storm wondered what he could do with this woman. “We wouldn’t be allowed to stay in a decent hotel. You want to sleep over a saloon? Besides that, folks will be shocked when they see you in those trousers. You want people to think you’re a fallen woman?”

With her chin raised, she placed her hands on her hips. “I am a good woman. You can tell them we are married and I wear britches to ride more easily.” She held up her hand and wiggled her fingers. “I have a wedding band, see?”

He raised his hands and backed up a step. “Oh, no. I’m not even pretending to be married. If I were ready to marry, which I’m not, I’d pick a woman who knew when to let a man do his job.”

“Ha, and when I recover my dowry, I will marry a man who knows a woman can do as much as a man.”

He swept a formal bow. “And when you marry, will you be wearing the lovely gown you now wear?”

She appeared angry enough to use that Colt on him. “You are wrong to…to talk so. I do not have the English words to tell you what I think, but do not try to leave me behind. If you do, I will go after the men alone.”

Disgusted, Storm stomped over and retrieved the horses. “Then let’s go.”

They rode into Llano in late afternoon. Since they arrived mid week, the town appeared peaceful and quiet. Storm spotted a hotel by the livery he remembered.

“If you’re determined to stick to me like glue, let’s stable the horses.”

At the stable, she staggered when she dismounted and he thought she might fall. He grabbed her arms. “Steady. You’re not used to riding so long.”

She remained quiet while he dealt with the hostler and insured his rifle and saddle would be safe. He threw his saddlebags over his shoulder and retrieved the two pillowcases and box he’d tied to the saddle pommel. They ambled the block toward the hotel.

He indicated a mercantile. “Just what we need. After we get our room, let’s head for that store before it closes. You probably need to replace a few things that burned.” When she glared at him, he added, “I’ll give you the money, all right? I don’t want folks thinking my wife runs around in men’s clothes. If anyone gets nosy, tell them you lost your bag crossing a river.”

She sniffed and sashayed as if she wore a ball gown instead of ill-fitting men’s trousers. “I will keep track and repay you when I kill those men.”

THE MOST UNSUITABLE COURTSHIP is available online in print and e-book.

The Amazon link is http://www.amazon.com/Most-Unsuitable-Courtship-Kincaids-ebook/dp/B00G5YXI6I/ref=sr_1_4?s=digital-text&ie=UTF8&qid=1395862169&sr=1-4&keywords=caroline+clemmons

My April 18 release will be GABE KINCAID, Kincaids book 4. Please watch for it.

Lyn, thanks for hosting me as your guest today.