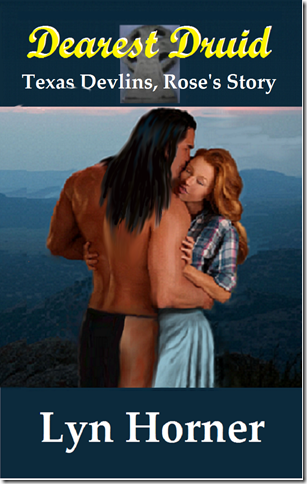 I can hear you now. What took so long? Short answer: I’m a slow writer.

Long answer: loads of research went into this book, plus life just gets in the way, but bottom line I’m persnickety about my writing. Every sentence, every word has to sound right. Yes, I said “sound” right. When writing, especially dialogue, I hear the words in my head. The characters talk to me, and if I don’t transcribe what they say correctly, they rant and rave until I get it right.

The result is another journey into the Old West, this time in 1876. Although Dearest Druid (Texas Devlins, Rose’s Story) opens in Bosque County, Texas, where both of the first two books in the trilogy – formerly Texas Druids – ended, much of the action takes place in the Indian Territory (Oklahoma.) Starring Rose Devlin, youngest of three psychic siblings, the tale centers around her extraordinary ability to heal with her mind, a secret gift that has caused her great pain in the past. She also harbors another secret, one she can’t share even with her brother and sister, one that threatens her chances of ever finding love.

Choctaw Jack, a half-breed cowboy introduced in Dashing Druid (Texas Devlins, Tye’s story), straddles two worlds, dividing his loyalties between his mother’s people and the family of a friend who died in the Civil War. Like Rose, he keeps shocking secrets. If they ever come to light, he stands to lose his job, possibly his life. Yet, he must risk everything to save someone he loves, even if it means kidnapping Rose.

As Jack spirits Rose away into the heart of the Indian Territory, she comes to accept his reason for abducting her but fears his nearness and the unwanted feelings he stirs within her. Along the way they’re tested by natural forces and individuals, both white and red, who revile Jack and scorn Rose for riding with him. But far greater challenges lie ahead. Rose’s healing power and courage will be pushed to their limits, while Jack finds the greatest risk he faces is caring too much for his lovely paleface captive.

Please come and take a ride with Rose and Jack across the Red River, through the ancient Wichita Mountains, and meet Native Americans who, although forced onto a reservation, retain their dignity and courage. Along the way you’ll learn how to fix Indian fry bread. Yum!

Oh, I almost forgot to remind y’all that Darlin’ Druid (Texas Devlins, Jessie’s Story) is still on special for just 99c on both Amazon and Barnes & Noble.