Friends, I’m happy to say Dashing Druid is finished! There are a few tech files to set

up; then it will be ready to upload to Amazon and Barnes & Noble. I hope this second book in my Texas Druids series will be for sale within another week or two. With that goal in mind, I hope you enjoy this last free excerpt.

Today’s excerpt is a change of scene from the last one. Tye’s brother-in-law, David, has a contract to supply horses and mules to the Army. Given the task of breaking mules as pack animals, Tye has other ideas.

Tye longed to try his hand at breaking one of the unruly broncs. He imagined himself riding a bucking horse to a standstill as he’d watched some of the cowboys do. But Sul, still acting as his keeper, refused to hear of it, and Tye knew better than to plead his case with David. That would undermine what little respect he’d earned from the other hands.

Satisfied that he’d worked the fight out of this particular mule, Tye decided to put his request to Sul one more time. By now the veteran cowboy had drifted over to the main corral where the horses were being broken under the direction of Luis Medina. Sturdily built but not very tall, the vaquero was as agile as a cat, and his skill with horses was close to miraculous. 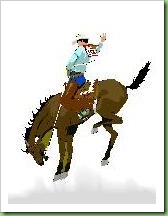 Luis was married to Maria, the ranch cook, and the couple had four children. Their oldest boy, Vittorio, acted as shepherd for his brothers and sister, and often for little Nora as well. Right now he was giving her a piggyback ride around the ranch yard. Tye grinned at her delighted squeals as he strode over to Sul and Luis.

The Mexican’s mustached, nut-brown face cracked into a smile at something Sul had just said. Then both men glanced at Tye as he walked up to join them.

“How’s that mule comin’ along, boy? You ready to tackle another one?” Sul asked.

Tye crossed his arms. “No, but I am ready to have a go at one of the horses.”

Scowling at him, Sul spat a stream of tobacco juice into the dust. “Shoot, you gonna pester me about that agin? How many times do I gotta say no? Just cuz Luis taught yuh to set a horse proper don’t mean you’re ready to climb aboard one of them hurricane decks.”

“And how will I ever be ready if ye never let me try? Isn’t the best way to learn simply to do it?”

“Amigo, why not let him try one time?” Luis said in his soft-spoken, melodious accent. He met Tye’s surprised gaze from the shade of his sombrero, his black mustache crooking upward.

Sul glowered at him. “And maybe have him break his fool neck? Now how would I face Miz Jessie if I let that happen?”

“The blame will be mine, not yours,” Luis replied calmly.

Indecision showed on Sul’s face, giving Tye a surge of hope. Finally, the old-timer rubbed his bristly chin and grumbled, “All right, have it your way, Luis. But if he gets hisself hurt, you’re darn tootin’ gonna do the explainin’.”

Moments later, Tye settled himself on a snorting, quivering bay mare while Luis and a hand named Pete Simms held her in check.

“Remember, try to keep her head up,” Luis instructed.

Tye nodded and took a firm grip on the reins with one hand. He would use his free arm for balance as he’d seen the other men do. His mouth was cotton-dry, and it felt like he had a hundred butterflies in his belly, but he was determined to make a good showing, especially in front of Luis.

Even so, he questioned his sanity when the infuriated mustang jumped straight up in the air under him and landed with a spine-wrenching jolt. On her second leap, he forgot all about keeping the mare’s head up. Instinctively, he grabbed the saddle horn, fighting to keep his seat. Now the ornery beast tucked her head and bounded forward in a twisting motion that turned her in a half circle.

The maneuver worked. Tye lost his grip and went flying. He slammed into the ground on his back, knocking the wind half out of him. Purely by reflex, he rolled out of the way to avoid being stomped. He ended up on his stomach near the corral fence with dirt in his mouth and laughter in his ears. Turning his head, he saw two cowhands grin down at him from the other side of the fence.

“Yuh look real natural down there, greenhorn,” one drawled while the other heehawed loudly.

By the saints, he’d show them!