On her 150 moves, all across the US, Leanore has seen a lot and witnessed many interesting, paranormal sights. She has written 14 novels; ten are currently published. She lives in the Western Town of San Antone, Texas, home of the Alamo.

A panoramic sky—blue and fathomless stretches over a dusty plain. A horse and ri

der move across the desolate land, as an eagle soars above. Restless and wild, the rider heads toward the hills as he leaves yet another old life behind him in the dust.

The lone horseman is focused on his destiny, in a world where the law doesn’t exist. He’s seen some sights that would turn a man cold, lived a life with a colt at his side and grit in his soul.

He is the west, a lone benefactor of a lawless age. He’s faced it all. The raw frontier with its bloody vengeance at the hands of savages, the hanging of men who’d gotten no fair trail, no jury of their peers. He’s ridden through the land of dry death, when he journeyed across the stark, endless desert with its mirages of useless dreams.

—Simply living with the violence of staying alive.

This lone rider, this man of the west, thought he’d lost his soul on the trail a long time back. He believed he had a hole in his chest where his heart should be. A hole bored out by blood spilt in the dusty streets, from one too many senseless duels. Emptiness loomed inside his soul from the splay of deadly bullets and the tear of slinging arrows.

He had believed in a living death, an existence with no feeling, no warmth—until he saw her.

His steely blue gaze met with flashing orbs of emerald green. The look in her eyes was one of defiance and spirit. As though she’d been against the high cliffs while facing a wrathful world, and had already stared death down with an avid will to live.

His heart moved in his chest. This so surprised him that he closed his eyes for a moment to feel—the sensation of being human. When he opened his eyes, she was gone. He squinted hard into the blaze of a noonday sun. Her silhouette was immersed in a shadow of dust, as she rode away with a group of riders.

The riders were Indian braves…

When I was a little girl, my dad was a rodeo rider. He was an actual Bronc Buster. My childlike eyes were wide open with awe, as I went to rodeo after rodeo. I laughed at the clowns, and later I realized that they were the real courage masters.

My dad loved the old cereal box westerns such as Roy Rogers crooning with a yodel in his voice. My dad yodeled all through my childhood. His favorite music was Johnny Cash and Hank Williams.

When I started writing romance, it was not westerns, but Paranormal Erotics. Since my cowboy dreams became more grown up in content, I decided to dabble with a Paranormal Western and I came up with the novella Lace & Leather.

I felt that the only thing missing from those old Western movies and dime store Louis Lamoure novels was passion. A heat, which had nothing to do with the blazing western sun. In my view, it would’ve completed these great stories to have a stubborn, bull headed female, meeting up with a hard bodied cowboy. These love scenes would soar off the charts!

For instance, in Two Mules for Sister Sarah? A wicked saloon hall girl, Shirley McLain fools Clint Eastwood, when she deceives him into believing she’s a nun on a mission of mercy. At the end, when he finds out the truth? I wanted that extra scene, where he gives her some sweet, sexy payback.

I’ve imagined all of my favorite Westerns with these types of heat scenes as an ending at the very least, while they rode away into the sun. In my western world, the Duke would’ve shown the Angel just what a Bad Man really was.

Wicked, you might say? I laugh with a sparkle in my eyes as I w 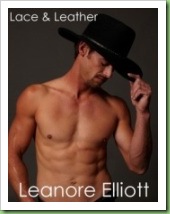 onder how some of those hunky cowboys would have performed after they took their boots off. If I would’ve been the western heroine? I would have had only one breathless suggestion, “Just leave that sexy Stetson on for a while—Cowboy…”

4 comments on “Western Romance, The Story of Us —– Part IX”