Yay! Caroline Clemmons, one of my favorite western romance authors, has a new release: McClintock’s Reluctant Bride (The McClintocks, Book 3). 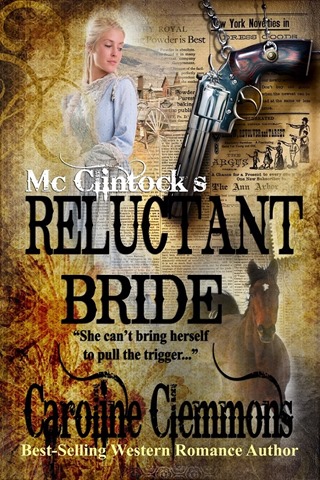 Nettie Clayton’s well-planned life is stolen in a few moments. All she wants is a better life for her family in McClintock Falls, Texas where her father can recover from years spent coal mining. Her teacher’s salary is slated toward saving for her younger brother to attend medical school. Her dreams are dashed when Josh McClintock mistakes her window for that of her neighbor. She wants to resist her parents’ decree, but there’s no way to win.

Josh McClintock’s free-wheeling life comes to an abrupt end after his birthday celebration. He works hard by day on the family ranch; he plays just as hard on weekends. He loves being single to play the field of willing females and has no plan to marry for five or six years. One drunken mistake alters his life and Nettie’s forever.

While Nettie and Josh struggle to deal with an unwanted marriage, a crazed villain planning his revenge against the McClintock family targets Josh and Nettie. What happens when the villain attacks?

Dawn’s light pouring through her open window indicated the time must be near six o’clock. Papa and Mama would be awake any minute. The kitchen where Mama would prepare breakfast was right under this room.

Pushing on Josh, Nettie pried her legs out from under his body. She tugged her nightgown free, thankfully without tearing it. Propping her knee against the mattress, she pulled his legs. When his feet hit the floor, she thought surely he’d awaken. But he didn’t. Ha, and people thought she slept soundly.

How could one man be so heavy?

Grabbing his shoulders, she tugged him toward the edge of the bed. “Come on, wake up and go back out the window before anyone sees you.”

He flung out his arms at her without opening his eyes. “Baby, where’s muh present?”

Evading his groping hands, she slapped at his arms. “Not here, I guarantee you.”

When that got no response, she pounded on his back. “Wake up, you crazy drunk.”

A rap sounded at her door. “Nettie? What’s Josh’s horse doing in front of our house?”

Good Heavens, who else had seen his familiar horse? Papa seeing the animal was enough. “You’d have to ask him.”

Giving up on getting Josh to awaken and climb out the window, she tugged him to the floor. He hit with a loud thump. Except for the noise, she thought it served him right.

“Nettie? Why haven’t you opened the door?”

“Just a minute.” Bracing her back against the wall for leverage, she pushed Josh under her bed. Hurriedly, she climbed back between the sheets. To hide Josh from anyone standing in the doorway, she draped her quilt to the floor on that side of the bed.

The knob turned and Papa came inside, followed by Mama.

“Good morning.” She brushed her hands across her face and shoved away hair that had escaped her braid.

Papa strode over to the window. Oh, no, she hadn’t noticed the shirt Josh had left hanging half in and half out on the sill.

Her father snatched the garment and narrowed his eyes. “Explain Josh’s shirt being here.”

She shrugged. “I guess he tossed it.”

“And did he also toss his legs that are sticking out from the foot of your bed, young woman?” He walked over and kicked something, Josh’s boots she supposed.

McCLINTOCK’S RELUCTANT BRIDE is available on these site: 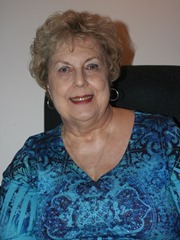 Caroline Clemmons is an Amazon bestselling and award winning author of historical and contemporary western romances. Her latest release is McCLINTOCK’S RELUCTANT BRIDE, McClintock series book three. A frequent speaker at conferences and seminars, she has taught workshops on characterization, point of view, and layering a novel.

Caroline is a member of Romance Writers of America and the Romance Writers chapters of Yellow Rose, From The Heart, and Hearts Through History. Her latest publications include the acclaimed historical Men of Stone Mountain Texas series, which includes audio versions of BRAZOS BRIDE and HIGH STAKES BRIDE. Her Kincaid series continues to resonate with readers. The latest in that series is GABE KINCAID with new releases scheduled in 2016.

Caroline and her husband live in the heart of Texas cowboy country with their menagerie of rescued pets. Prior to writing full time, her jobs included stay-at-home mom (her favorite), secretary, newspaper reporter and featured columnist, assistant to the managing editor of a psychology journal, bookkeeper for the local tax assessor and—for a short and fun time—an antique dealer. When she’s not indulging her passion for writing, Caroline enjoys family, reading, travel, antiquing, genealogy, painting, and getting together with friends. Find her on her blog, website, Facebook, Twitter, Goodreads, Google+, WattPad, Shelfari, and Pinterest.